A Brief History of HATA

In support of the Government’s initiatives to promote cruise travel and multi-destination travel, HATA Convention Committee held this year’s convention on a cruise-ship making her home-port sailing from Hong Kong to Taiwan. During the convention, participants strengthened the knowledge of diversified cruise products.
In order to foster a better relationship with our neighboring cities, HATA worked closely with trade partners, such as The Pacific Asia Travel Association (PATA) and Macau Government Tourist Office (MGTO), to jointly promote “multi-destination” tourism products. The Association will continue its support in strengthening co-operation and communication among various stakeholders. 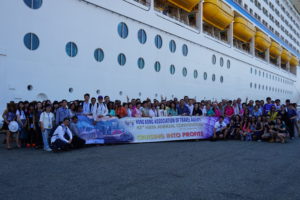 During the 42nd HATA Annual Overseas Convention, HATA and Tainan Association of Travel Agent (TATA) signed a MOU which was witnessed by Mr Liu Chien-sin, Tainan City Government Deputy Secretary-General, and Mr. Kevin Lai, Deputy Director (Culture and Strategic Development) of the Hong Kong Economic, Trade and Cultural Office (HKETCO). The MOU aims to strengthen the tourism interaction and cooperation between Hong Kong and Tainan in the domain of destination promotion and to organize delegation for travel trade representatives. 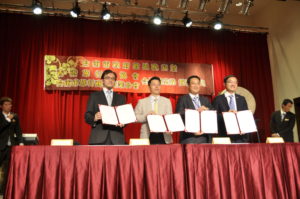 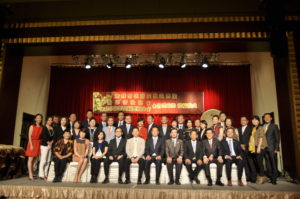 In line with the rising trend of cruise travel and the commissioning of the Kai Tak Cruise Terminal (KTCT), HATA Cruise Committee organized a Travel and Cruise Mart at the BP International House. Sellers, including some international cruise lines, great attractions, world-class hotels, professional transportation services as well as 200 trade members participated in the Mart. 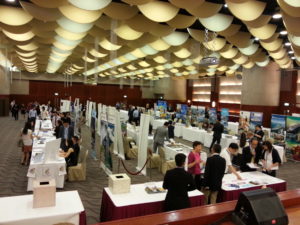 The Hong Kong Association of Travel Agents (HATA) celebrated its 55th Anniversary in 2012. A poolside BBQ Dinner was held at the United Services Recreation Club (USRC). 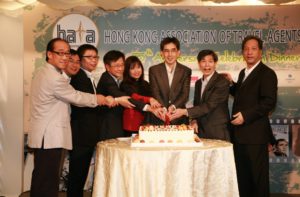 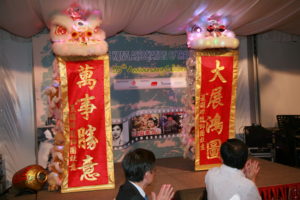 Whereas cruise tourism has begun to gain popularity in Asia, HATA organized a series of activities to enrich our members’ in-depth knowledge and strengthen their insights on cruising. In addition to the “2011 Cruise Mart”, HATA chose “Beyond the Seas” as the theme of the 39th HATA Annual Overseas Convention to keep member agents moving with the times. 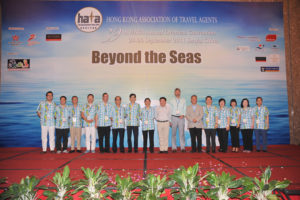 HATA annual overseas conventions play an important part of our continuing and increasing efforts to bring about change for the better in our industry. Apart from our members and trade partners, we opened our convention to students for the first time in the event’s 38-year history. More than 20 tourism students from four allied educational institutions took this opportunity to join in the convention’s discussion and networked with industry partners. 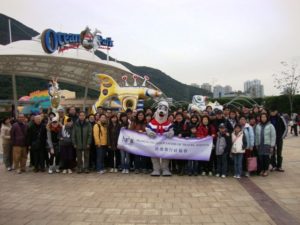 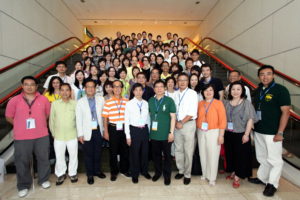 The Association announced to establish a “Travel & Tourism Academy” in collaboration with our two Allied Members. Hong Kong College of Technology (HKCT) offers Professional Diploma and Professional Certificate in Marketing and Tourism programmes, and School of Professional Education and Executive Development (SPEED) of the Hong Kong Polytechnic University offers Bachelor of Arts in Travel Industry Management programme. The main objective of the collaboration is to enhance competitive power and self competence to our full time travel practitioners with professional work place experience, who are exploring and seeking part-time study opportunity in tourism management to further career prospects and industry recognition by both the industry and general public. 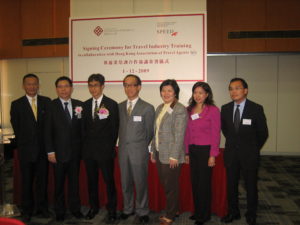 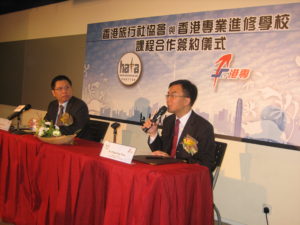 The Association had a great occasion for an important milestone in our history to reach an agreement with the Tourism Commission to organize a series of enterprising seminars and workshops for the travel agency community from November 2008 to June 2009. The objective of these professional development programs – Quality Service Beyond Expectations was to enhance quality service delivery skills and competencies to reinforce Hong Kong’s image as Asia’s World City and one of the world’s foremost visitors’ destination. 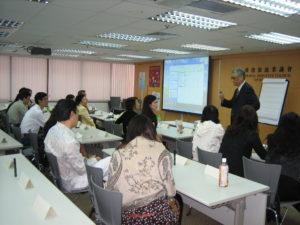 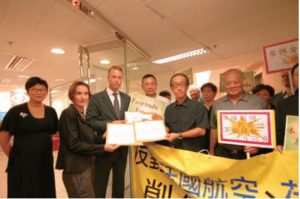 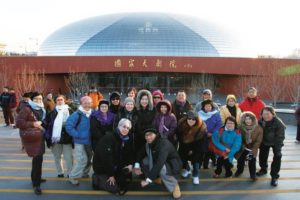 2007 marked the 50th anniversary of HATA with a series of celebration events launched, including the HATA’s Golden Jubilee Dinner, the first ever membership cards and the 50th Anniversary publication. The 35th HATA Annual Overseas Convention was held in Macau where the first overseas convention was held 35 years ago. The Executive Committee continues its presence at the world conferences, such as “15th Incentive Travel & Conventions, Meeting Asia” and the “10th Corporate Travel World”, bringing the brand of HATA to the world recognition. The “14-day 100% Refund Guarantee Scheme” for shoppers on inbound tour groups at registered shops is implemented with the aim of improving self-regulatory measures among members. 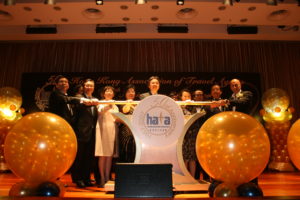 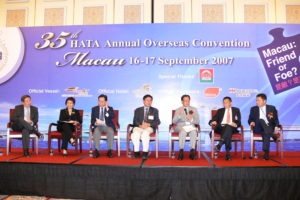 The rise in cost of fuels has created lots of problems in the outbound sector for ticketing agents and tour agents. Various meetings were held to resolve the damage and the collected opinion from members were reflected to TIC for appropriate action. The Annual Overseas convention was held in Hangzhou and keynote speakers are invited to share their ideas on the theme of “Are We Ready to Capitalize on China’s Tourism Growth?” To pave the way of making HATA be a global brand, the Committee began to involve in international conference, such as PATA Conference in Pattaya and the PATA Travel Mart held in Hong Kong. 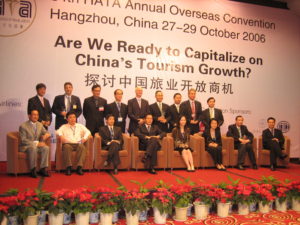 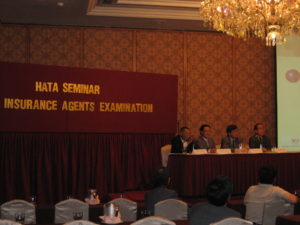 The annual HATA overseas convention took place in Kuala Lumpur with the theme “Overcoming Challenges through Partnerships”. Attended by the Malaysian Association of Tour & Travel Agents as well as members from the National Association of Travel Agents Singapore, the event was advanced to be a regional affair. To support the SME Mentorship Program launched by Trade and Industry Department, some executive committee members have become mentors to provide free counseling on one to one basis. 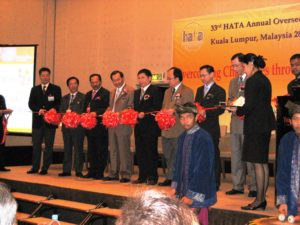 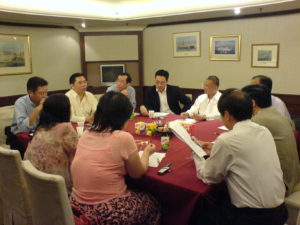 With the substantial growth of China inbound business, a China and Inbound Working Group was formed with different travel-related associations and business partners. Visa free status was granted by the Japanese government to SAR passport holders from 1st April 2004, a meaningful growth of outbound tours was expected. The Annual Overseas Convention was held in Hanoi this year with the theme “Surviving in the low cost environment” to discuss the impact of low cost carriers to the travel industry. HATA and the International Cruise Council of Australasia (ICCA) joined hands to establish an international accreditation for training programs of selling cruise. 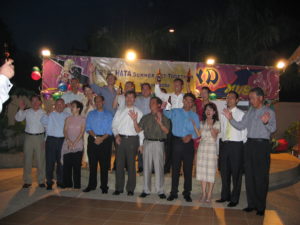 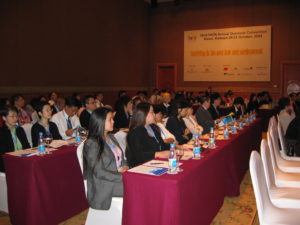 The outbreak of SARS has held the attention of HATA to create synergy to salvage and take remedial actions against the impact of this fatal inflection on the business. HATA actively participated in international events and workshops to promote Hong Kong as a safe place to visit. A global PR and advertising campaign had been launched and trade partners from all overseas markets were invited to revisit Hong Kong. In preparing for the Licensing of the Inbound Tour Guides, HATA participated in the drafting of the Code of Conduct of Tourist Guide. The 31st annual overseas convention was held in Bangkok. It is the largest ever overseas convention which dovetailed with Dragonair’s inaugural service to Bangkok.

Though the general outlook for inbound business was uncertain, the number of visitors from Mainland made a healthy growth. To further tighten the relationship with neighboring cities in the Pearl River Delta region, the Executive Committee made numerous trips to tourism official and business partners in Macau, Guangzhou, Panyu, Shenzhen and Shanghai. The amended Travel Agents Ordinance has taken effect from 1 November, 2002 and it requires all travel agents to be licensed.

With the support of the government policy to boost the tourist industry in Hong Kong, HATA and Hong Kong Tourism Board joined hands to form the HATA/HKTB Tour Development Working Group with the purpose of developing new tour products to meet the market needs. HATA also supported the HKTB campaign of “The City of Life: Hong Kong is it!” , a promotion event that involved not only the government, but every citizen of Hong Kong. The 29th Annual Overseas Convention under the theme “The Travel Agent of the New Millennium” was held in Shanghai with the support of the Shanghai Municipal Tourism Administration. More than 130 delegates from Hong Kong, Singapore and various parts of China joined the event.

China & Inbound Committee joined hands with Hong Kong Tourist Association (HKTA) to form a working group to develop new products for inbound tours. It has identified a new tour and an inspection tour. With a closer working relationship between the two parties, some issues such as immigration, hotel rates, promoting Pearl River Delta Region were also on the agenda in the working group. With the theme “The Future Is Now”, the 28th Annual Convention took place in Kuala Lumpur, Malaysia. A fact-finding tour to the Pearl River Delta region was organized, since the first one in 1993. A Cruise Committee has been formed in view of the increase of interest in cruising. To keep in pace with the Committee’s promotion, more information on cruising was added to the HATA website, training courses on how to sell cruises was on schedule and a public seminar for trade briefing was also organized.

The China and Inbound committees were combined into one and became the China & Inbound Committee. HATA initiated a meeting with the Crime Prevention Bureau of The Hong Kong Police Force, the Consumer Council and Hong Kong Tourist Association to discuss how to prevent overseas visitors from being cheated by unscrupulous shops in tourist areas. The Annual Convention was held on the Star Cruise sailing to Haikou. With the support of Cathay Pacific Airways, HATA organized a seminar entitled “An Introduction to Fee Based Pricing”. A task force on Fee Based Pricing was formed after the seminar with the responsibility of data collection.

The procedures of licensing and operations of Hong Kong agents in the Mainland becomes an issue of concern as the new policy is implemented. The 27th HATA Annual Convention was held in Macau due to economical and proximity concerns. Ticketing Committee, originally combined with the Outbound Committee was separated from it to deal with its own issues. With its setup, a closer working relationship with airlines is established.

1997 is the 40th anniversary since the founding of HATA. Membership now stands at 350.

HATA went to Paris to celebrate 25 years of organizing overseas convention. HATA wanted this convention to be talked about for years to come and this was achieved as even today it is still the most talked about convention ever. HATA goes on the Internet. The HATA web site is launched.

In late 1954, the idea to form an association was first conceived by Hong Kong IATA agents. Three years later, in 1957, the Hong Kong Association Travel Agents was finally formed
In 1958, with 23 members, HATA produced its constitution and bylaws Membership stood at 59
In 1968
1972 saw HATA holding its first overseas annual convention. Issues in the 70’s included traffic problems in Hong Kong, inaccessibility of tour groups to Lok Ma Chau – a vantage border lookout point where visitors came to look into China, etc.

1982 HATA celebrated its silver jubilee with a formal dinner and dance
1986 was the year HATA held its 15th annual convention and the venue was Jakarta with 150 members attending. This was also the year that HATA was appointed the training arm of the travel industry